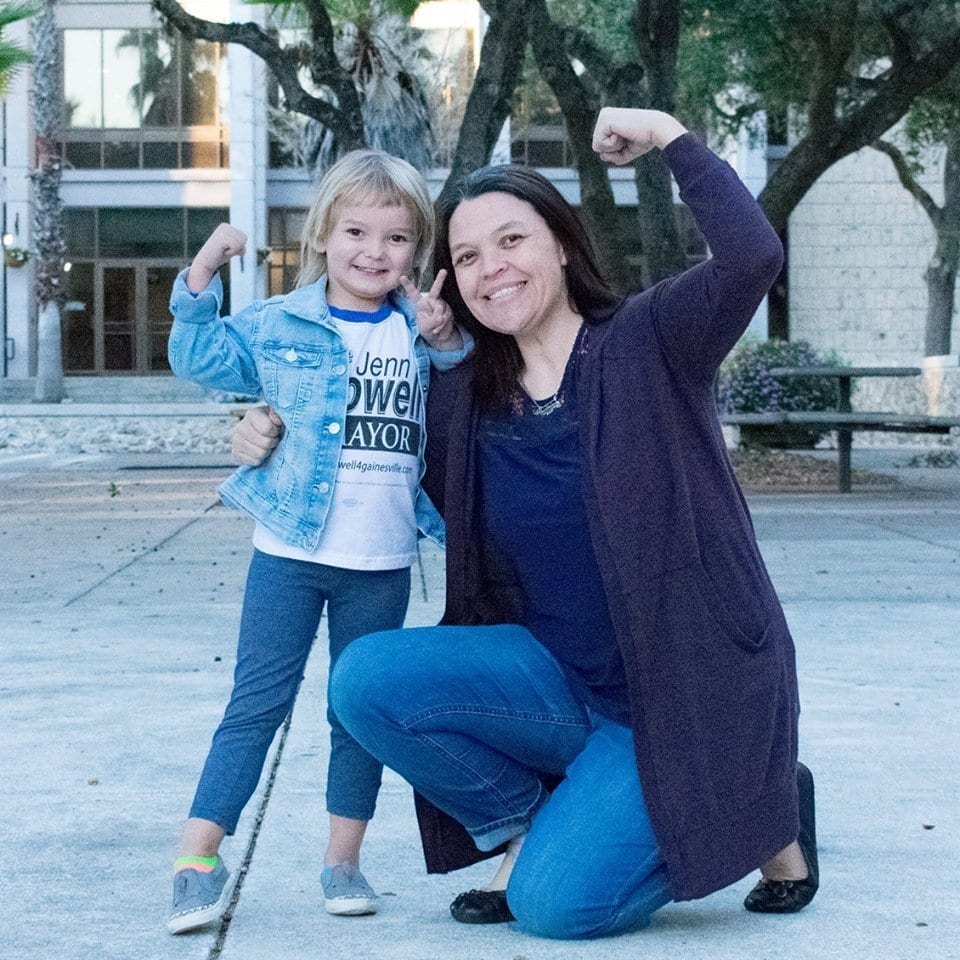 If elected, Powell plans to pressure the University of Florida to begin a Payment in Lieu of Taxes (PILOT) program to demand the insitution began paying taxes. On the topic of the University, Powell also hopes to work with the Utilities Advisory Board to see that UF uses locally-owned public utility company, GRU, thereby ending its current contract with Duke Energy and use of non-renewable natural gas. Finally, Powell wants to foster a better City of Gainesville workplace that puts power back in the hands of Gainesvillians by hiring a City Manager with “citizen-first” credentials.

A single mom to 4 children, her days are spent running a small local business and working as a part-time legal assistant. Powell’s dedication to hard work and love for Gainesville have fostered a passion for local government. After an unsuccessful run for an at-large City Commissioner position in 2017, Powell returns to the ballot in hopes of bringing much-needed changes to the city.

What role can the city commission play to create job opportunities to recruit and retain young professionals?

The mayor should be pressuring institutions like the University of Florida and other large employers to pay a living wage. That way when young professionals come to work here they know they are surrounded by service workers, custodians, and working parents that can afford to survive more than paycheck to paycheck. They can take pride in their city and want to stay here. I think it is important to ask young professionals, with skills and expertise, this question. What are you doing to improve equity, redistribute prosperity, and hold elected officials accountable in Gainesville?

ACEL supports efforts to increase the ease, safety, and number of alternative transportation options within Alachua County. If elected, how would you address the issue of transportation in the city?

There is no such thing as “alternative” transportation. People just take the cheapest and fastest way of getting from place to place as they can. Very few people choose to ride a bus, walk, or bicycle if they can afford a car and a place to park it. That’s why free ride programs for youth and seniors are important. They make public transportation a right and not a privilege. We are surrounded by wealthy institutions that can afford to pay for these programs, if only we have a mayor who demands it.

It is almost impossible to increase affordable housing by building new construction. It’s just not profitable to the out of town developers. That’s why establishing a strong renters’ rights program is important. I endorse the program recommended by the Alachua County Labor Coalition. The incumbent has all of a sudden taken interest in this issue during the election cycle, even claiming credit for creating a renters’ rights program which he has had nothing to do with.

Please briefly describe your top three policy priorities you will implement if elected.

We cannot survive as a community with 50% of our neighbors living paycheck to paycheck, according to a recent United Way study. Wealthy institutions and developers must pay their fair share.

As your next mayor I will publicly pressure the University of Florida to initiate a PILOT (Payment in Lieu of Taxes) program like those begun in other cities. There’s no reason our richest institution shouldn’t be paying taxes like everyone else. They run like a business, they should pay like one.

As your next mayor I will work with the Utilities Advisory Board, which recommends that University of Florida’s main campus end its contract with Duke Energy and stop using non-renewable natural gas. This puts local money in the hands of out of town shareholders and it’s wrong. UF main campus needs to be with GRU, our locally owned public utility.

As your next mayor I will foster a workplace environment at the City of Gainesville where staff and managers feel comfortable coming to elected officials with problems and issues, where the interests of citizens are put first before those of developers. We need to hire a City Manager with citizen-first credentials who does not serve the Chamber of Commerce but carries out the orders of elected officials.