On February 26, UF Health’s Arts in Medicine program held 352 Creates, a community-wide pop-up art event that showcased the talent and creativity of Alachua County’s residents. Over 50 organizations participated in the celebration, which encouraged people to incorporate art into their day.

ACEL wanted to take it one step further and showcase some of the world-class nature, culture, and history that Alachua County has to offer. We got two incredible local artists, Denean Caperton and Tom Hart from Sequential Artists Workshop, to sketch iconic photos from around the county, and we placed them in over 20 local bars and restaurants across Gainesville. On the back, we highlighted what made these scenes special to Alachua County. We then encouraged people to tag their new masterpieces on social media with #352Creates. Here are some of the best interpretations from each coloring page.

Sarah Barnes, the development director for the Hippodrome State Theatre, drew this zany re-creation of the Hippodrome. With a mix of polka-dot columns and various shades of purple, this seems like a real step up from the current white building. Maybe the city would be interested in paying for the upgrade?

Artist: Denean Caperton
Caption: The iconic Hippodrome State Theatre serves as a constant symbol of the history and culture in Alachua County. Built in 1911 as a post office, this historic national landmark now houses one of the leading regional theaters in the country. Its collection of critically acclaimed productions draws more than 20,000 patrons annually and has hosted acclaimed playwrights such as Tennessee Williams and Paula Vogel.

This tranquil coloring of La Chua Trail comes compliments of the patrons of The Bull.

Caption: Located a mere 10 minutes from downtown Gainesville, entering La Chua Trail feels like entering another world. The heart of Paynes Prairie, La Chua Trail teems with wading birds, horses, bison, and the main attraction, alligators. Enormous 6-foot gators line the path of La Chua, making it one of the best wild alligator viewing locations in the world. An easy 3-mile hike, La Chua Trail is one of the great gems of Alachua County.

This magical, realist version of the Bison at Paynes Prairie comes courtesy of the patrons at The Bull. Between the beautiful blue sky, green grass, purple trees, and cannon emanating from side of the Bison, this drawing is good enough to make any 20th-century Colombian novelist proud.

Caption: Driving down I-75 you can’t miss it: the largest freshwater wetland north of the Everglades, Paynes Prairie. World-renowned for its diverse and pristine ecosystem, Paynes Prairie boasts over 20 distinct biological communities with a rich array of habitats for wildlife including alligators, bison, wild horses, and over 270 species of birds. Eight trails provide over 30 miles of hiking, bicycling, and camping in this incredible national landmark. 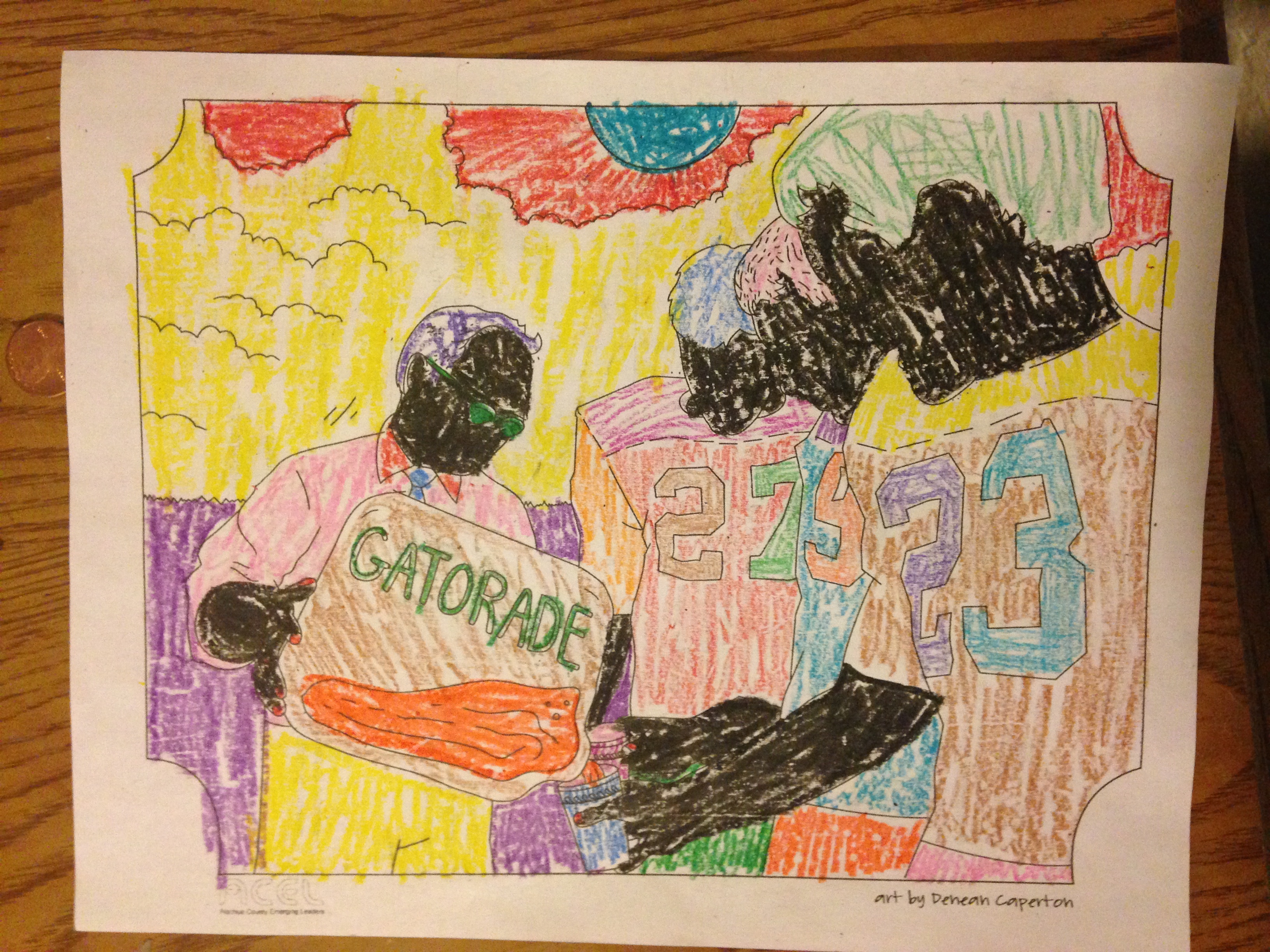 A patron of Pop-a-Top drew this psychedelic rendering of Robert Cade testing out Gatorade in 1968. While none of us in ACEL were alive in 1968, our historical understanding is that Gainesville did not have a red sky, turquoise sun, purple grass, and yellow clouds at the time. Of course, this was the same year that Jimi Hendrix released “Electric Ladyland,” so anything’s possible.

Caption: Dr. Robert Cade was a professor of Medicine at the University of Florida when he first created Gatorade to help hydrate the Gator Football Team. Now a billion-dollar brand, this was one of the first sparks of the innovation and entrepreneurship that have since become staples of Alachua County’s economy and culture. Dr. Cade is pictured here in 1968 testing his new product during Gator football practice.

Research has shown that young professionals gravitate toward cities with a “sense of place,” meaning cities with their own unique feel and look. Alachua County is one of the most unique communities in the southeast, but many people don’t know about all of our history and culture. We created these coloring pages to draw attention to all that Alachua County has to offer, but to do it in a way that was fun and would keep people engaged.

It was an amazing event and we are happy to have been a small part of it. Be on the lookout for a new set of photos next year!